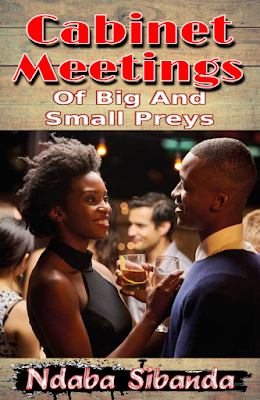 Banqobile Virginia Dakamela is a published writer and book reviewer who hails from Bulawayo.  She has received international honorariums and accolades for her brand of poetry and prose.  One of her stories was published in an anthology which was studied at high schools and is a set book in a local university. Her works appear or are forthcoming in publications like Better Than Starbucks, Hawaii Review, Pond Savant and Piker Press . She contributed to Eidos: Volume Two of Unitatis published by Ukiyoto Publishing.  She is currently working on her childrens novel.

The book kicks off with a scene featuring a technology-crazy old man who is drinking with a girl young enough to be his granddaughter. The old man`s table manners do not endear him to the girl either.

The novella, Cabinet Meetings is an exploration of gender relations set in a background of economic instability. The novella centres on the character of SekaBuhle who is an avowed  alcoholic. The editors of Huza Press, a Rwandan publishing house are of the opinion that the premise and direction behind the story of a ranting husband Muzi— is interesting. They describe Sibanda's vocabulary as well off. They commend the author for his use of some common idioms that give the story a sense of social context.

SekaBuhle faces the dilemma of quitting drinking in order to preserve his marriage. His resolve to quit doesn't last long though, much to the chagrin of his articulate, self-assured and straight-talking wife who chides him at every turn. The drinking escapades are not just isolated cases of imbibing; they constitute moments of indulging in 'Cabinet meetings ' in the company of Thulani,  a loudmouthed friend of SekaBuhle, moments of toxic masculinity bordering on traditional masculine traits like misogyny, sexism and aggression. 'Cabinet meetings', as depicted in the book epitomize a time of drinking, gossiping and fooling around with the womenfolk. Thulani is a hilarious character who claims superiority over the female sex: an illusion he bathes in until his wife beats him up in the full view of other 'cabinet members ', for hooking a brothel- trotting prostitute who claims to have lived in several countries.  He presents himself to SekaBuhle and other Cabinet members as an expert in handling women's affairs.

Basically, when Thulani hangs out with his drinking male friends in town, all they do and discuss is centred on how they should flex their muscles at home as men. Thulani has appointed himself to be the men`s mentor and influencer on issues of home management and love. However, when his wife discovers his philandering and chauvinistic overtures and escapades, she undresses and disciplines him in front of his students and girlfriend. It is a dramatic turn. Thulani`s girlfriend is a disgruntled and disillusioned returnee from the Diaspora.

The book draws its strength from the limited number of characters who effectively present a number of themes. SekaBuhle is an unusual epitome of African men. He is a victim of verbal abuse in the hands of his talkative wife. He is ridiculed, mocked and even suspects that he has been fed herbs to make him a stupefied man. In a man's world, women should be submissive and docile. NakaBuhle refuses to bow to that belief. She asserts her position in the marriage, she is at par with her husband. She sarcastically remarks that, The beauty of a wife-husband interaction or any other form of communication is in the observance and submission to the co-operative principle. She is stating a fact and is unapologetic for her view of her husband's drinking habits. She characteristically hates her in-laws and loses respect for her husband along the way.

Thulani, the ever-present cabinet member is faithful to ‘cabinet meetings’. He is SekaBuhle's strongest ally. He claims to possess a deep knowledge of how women behave. Does he really know what women want in a relationship or in a marriage? Does he really understand the psychology of women or he just drowns in stereotypical triviality? He claims that women can never turn down proposals from men. He says they pretend to delay giving a response but eventually, accept the proposal. He castigates SekaBuhle for being ruled by his wife. Thulani's character reveals the bigoted and chauvinistic view some men hold in the society with regards to women. The beating he endures from his wife towards the end of the text is symbolic of how his views of women are growing irrelevant in a society that is turning feminist in nature.

The prevailing themes in the text are: chauvinism, women emancipation, corruption, abuse, life in the Diaspora and religious escapism. Men in the novella thrive on the belief that they are superior to women. SekaBuhle views NakaBuhle's voice over unfair treatment in marriage as a challenge on his manhood hence he suspects he has been bewitched. Thulani is no better as he divorces a woman for owning a sex toy. He refuses to question why his wife would complement her sex life with a sex toy, which is obvious that she is disgruntled. Even the older generation of males prey on young girls for sexual gratification, a clear sign of chauvinist tendencies.

NakaBuhle is a new breed of women out to emancipate themselves from the clutches of chauvinism and patriachy. In the dialogue with SekaBuhle, she clearly points out that she won't submit to his alcohol- induced behaviour. The holiday to Victoria Falls is symbolic of her dominance. Her demand for a holiday to Seychelles creates a glimmer of hope that she will have a way in the marriage.

The use of euphemism on issues associated with bribes and kickbacks is far from being an act of appeasement, politeness and approval. For example, the writer sarcastically refers to malevolent and prevalent corruption as the greasing of palms '. It is more of an indictment than an endorsement.  The habit of greasing palms speaks of rot and of a system torn to pieces by greed, injustices and bungling. Those who see it and do nothing about it or fall victim to it are more of aiders than deterrents to the rot. Even in a simple place of leisure, patrons affiliated to a certain political party have privileges and can engage in unlawful activities with impunity. The old man in the first chapter, "Of Pathetic Pythons ", is a caricature of the rotten system of governance. Serpents in the context of the story symbolize lies, evil and temptation like in the Christian tradition.

The old man is shamelessly clinging to a girl younger than him by decades. His love for revelling in such an advanced age epitomizes the stance by some African leaders to cling to power for the sake of self-gratification, self- aggrandizement and the protection of their loot.  The phrase National Liability "on page number 6 aptly describes what the old man is! The smell of sleaze is detectable and detestable, for example, one can see it through the actions of the police details who brazenly demand that SekaBuhle grease their palms even where the papers are in order. They unashamedly point out that the economy is bad hence the need for them to make extra money by targeting innocent citizens. Talk of a lopsided system that penalizes and criminalizes the innocent souls, how relevant and revealing this story is!

Human beings have been known to have a tendency that seeks distraction, aversion and relief from unpleasant realities, especially by seeking entertainment, amusement or engaging in fantasy or evasion. The plot of Cabinet Meetings hinges on a man's attempt to fight alcoholism. It is like virtual reality which seeks to offer a form of escapism. Alcohol in the text is an escape from economic turmoil and a loveless marriage. Like a huge number of his countrymen and countrywomen, the economic turmoil makes it difficult for him to honour his wife's demands for a holiday in a destination outside the country.

The economic mayhem is a result of political misgovernance. In turn, mismanagement breeds corruption. Parallel to it, is the institution of marriage that is threatened by the need for each sex to prove its prowess. As a result, SekaBuhle escapes to the warm arms of ‘cabinet members borne by the need to deal with economic and political frustrations and marital challenges. In Cabinet Meetings, men indulge in drinking and momentarily lose track of the world and its problems. SekaBuhle summarises the purpose of the cabinet meetings as, " ...we swam in beer until my judgment of everything I saw or thought or felt was one flighty, amusing and roller-skating experience."

The novella is told from the point of view of SekaBuhle: the aggrieved male character. He gives personal insights into what goes on in the venues where they indulge in beer. He gives an unbiased view of his wife. It is contextually and culturally stimulating that Muzi is referred to as SekaBuhle, which plainly means The father of Buhle. By the same token, Thola is referred to as NakaBuhle, which literally means The mother of Buhle. The author also uses another interesting and cautions style of writing: the naming of characters such that their names have meanings. Sibanda makes use of antonomasia , which is a kind of metonym in which an epithet or phrase takes the place of a proper name such as “Shut Up—qualifies to be called my chum” or “Hi Queen of his eyes.”

Thulani who is supposed to be the 'quiet one ' as his name suggests— is a chatterbox who considers himself a distinguished scholar on the female specie until he is heavily humbled in a twist of the tale, at the end of the novella. His beating surprises the reader as he projects an image of a man who can never lose to women. The writer also uses symbolism and caricature to capture pertinent themes. His description of characters and scenes is concise and vivid. Each chapter is fittingly titled and descriptive of what will unfold in that particular subdivision or episode. For instance, the final chapter is entitled, ' In tatters '. The word ' tatters ' is a pun. Thulani and his girlfriend are beaten to tatters while the reader is also made to laugh at this stark revelation that Thulani is not after all the invincible specialist he claims to be. His girlfriend who is touted as an eagle and the crème de la crème of romance, power and intelligence feels the taste of wing-clipping.  Her skimpy dress is left in shreds.

Reading Cabinet Meetings, I was taken by the humorous presentation of characters. Each character— from the old politician to NakaBuhle— is larger than life. Marital woes are presented more as a figment of a woman's imagination than as a reality. However the bold women in the form of NakaBuhle and Thulani's wife are also a pleasure to consider. One proverb of ancient origin that says when an organisation or state fails, it is the leadership that is the root causecomes to the mind. The proverb goes: "A fish rots from the head down". To this end, the book also exposes how society is generally rotten from state governance to industrial paralysis and down to the privacy of a variety of institutions and the institution of marriage itself.  A society with ridiculously high levels of unemployment, social disparities and poverty is a socio-economic disaster in waiting. Corruption has left the country in shreds.  Cabinet Meetings was considered for the Graywolf Press Africa Prize 2018.